You know those dreams where you are running through a swamp and jump into the air and will yourself to start flying higher and higher? While being chased by zombies and semi-trucks and tornadoes? And you’re really a robotic werewolf wielding a broadsword?

Yeah, that is kind of what revising a novel feels like to me! That surreal, adrenaline-rush WTF-is-happening feeling.

Less than a week ago, I decided to revise The Collars We Wear–a fantasy novel about a human sorcerer and a fae prince who become friends instead of enemies, which leads their peoples to the edge of war.

What I did not expect was this constant excitement-rush when thinking about the process! From marking up the manuscript to creating a list of things I needed to fix, from photoshopping myself into a noir setting to drafting a synopsis and pitch–it has been wild. Exhilarating.

So now it comes to the big step: writing new material to build muscle on the draft. 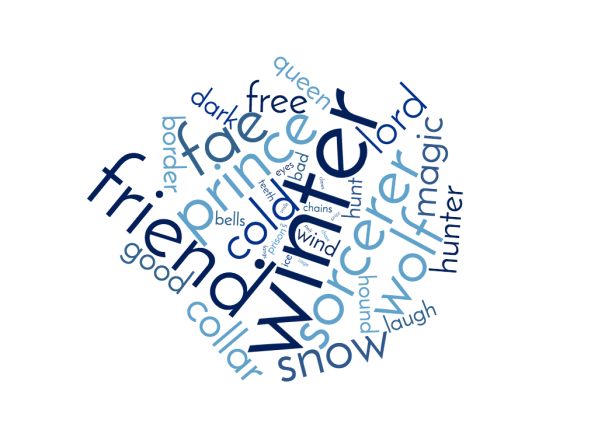 What’s It Got In In Its Pocketeses, Precious?

The first draft of this novel has three point-of-view (POV) characters: Bane (the sorcerer), Damaveil (his mentor), and Inspector Rajosja (from the Ministry of Arcane Crimes).

Bane and Rajosja keep their POV status, because they are major characters. Damaveil, while adorable, does not add anything meaningful with scenes from his perspective. I chose to cut his POV, and rework any necessary information into different scenes. I need to add more Rajosja scenes–since she mysteriously vanished in the middle and then showed up later to kick ass…and also because she’s awesome–and that will be the second part of a two-pronged drafting attack.

What is missing is the point of view of the other main character: Winterblade (fae prince). He’s rather crucial to the entire plot. If Bane and Winterblade never meet, then the book doesn’t exist.

So the first step will be writing all of Winterblade’s POV scenes and stitching them into the narrative where they belong.

A small tactic I’ve utilized when crafting new words is to pick a series of “flavor notes” that describe the tone, texture, or theme of the story. Example:

Winter Bride is a short story set in the novel world and was published in Kaleidotrope.

When you fall asleep, the dream — the terrible dream — comes again.

You stand in a desert, wind that never warms you blurring the dunes with dust, your ankles buried in sand.

“We will leave here,” says the sorceress, hidden in the darkness. Her voice is soft as a razor’s caress. She is the lord’s favorite bride, the untamable one. “Soon.”

You push aside the sand like curtains, but she is always just shy of your reach, a silhouette. You have no voice in the dream.

“I will take you away from him.” The sorceress is the mistress of illusions. It was how she won the Winter Lord’s favor. (She claims he cannot find her true nature, and so he tries, continually fascinated.) “Soon the moons will be dark and Winter will sleep. It is then we will be free.”

The sorceress is the only one you believe can manipulate dreams in Winter.

Still you cannot find her in the sands.

You panic. If she cannot see you, will she forget? You cannot stay here alone. You cannot.

The sand darkens, chills, and turns into snow.

Upon waking, you find the moons have waned and the pale, cold day has replaced them. There is no sun in this world.

The Winter Lord still holds you curled against his chest, his eyes closed. “You are so restless in sleep, pet.”

Your pulse trembles. The Winter Lord does not dream — so you spin a lie before he compels you to give him truth and betray what you saw. “I dreamed of the Spring Hunt, my lord. You were a doe and I a bear.”

He caresses your throat with one hand. “And how did it end?”

“How does it always end, my lord?”

–from Winter Bride by A. Merc Rustad (Kaleidotrope, 2014)

(It’s set chronologically before The Collars We Wear.)

For this story, flavor notes might be: brittle, cold, sharp. These evoke a sense of tone and style for me. It influences the voice and word choice, the flow and atmosphere.

I think a lot about flavor notes for different stories. Each story has its own voice, its own heartbeat;  word-flavors shift and change, but they are always present.

When I estimated that I need approximately 30k of new words for the novel, the bulk of that is a single POV–Winterblade’s. The upside of this is that I know what happens, I know the character well, I have my set of flavor notes for these chapters.

SCHEDULES FOR THE SCHEDULE GOD! BLOCKS UNTO THE BLOCK THRONE

(Appropriate Tributes is my absolute favorite Twitter bot. You may have noticed.)

I’m experimenting with scheduling myself blocks of writing time before work, or on days off, and then treating those blocks as actual work-shifts. I need to be at the library or coffee shop (somewhere that is not near the Xbox or the couch) at a specified time, then I sit down and need to work. It’s a structure, a pattern, and a change in atmosphere that gets my brain into different grooves.

It’s early in the test-run (less than a week), but now that I generally have mornings free, and I am used to being up at ridiculous hours, I’ve been productive already. It’s glorious, you guys. ❤ Energy! Words! Coffee!

I read and very much enjoyed Rachael Aaron’s book 2k to 10k: Writing Faster, Writing Better, and Writing More of What You Love. I recommend checking it out–it’s short and to the point, charming, helpful, and refreshingly upbeat.

One of the many gems in this book was the idea of a triangle that’s composed of knowledge, energy, and enthusiasm.

Knowing what you’re going to write (I did that with notes, a list, and synopsis), having the energy to write (I’m aiming for mornings when my brain is functioning best), and being enthusiastic about what you write. This formula that makes perfect sense to me. That last part, the enthusiasm? HELL YEAH I’M EXCITED!

I love this novel, these characters. The story hits all my narrative buttons. I want to share it. So yep, the enthusiasm is definitely present.

Since writing draft-things is easier to track for me on twitter, rather than extensive blog posts for each session, I will probably be live-tweeting writing sessions when I begin. (I’m @Merc_Rustad there.)

Then at the end of next week (or whenever I hit a good summary point) I will make a log about how MISSION: NEW MATERIAL went. 🙂