It was spring…for about three days, and then Winter returned. No one is surprised. (But while it was warm, a couple trees dared to flower and add some color to the gray landscape!) 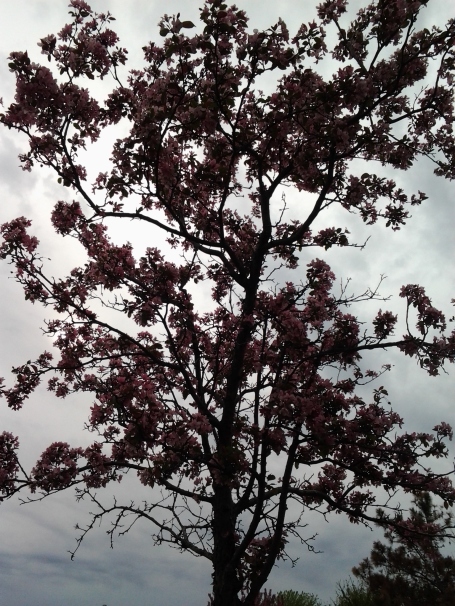 In English class yesterday, we had a timed essay–which was not so much an essay as writing an artist’s statement in a given amount of time. I’ve never done one of these; I’ve probably read maybe half a dozen official-like Artist Statements (caps and all), so really, I had very little idea of what one should be.

Therefore, I talked about robots. (The next incarnation will have dinosaurs. BECAUSE DINOSAURS.)

Chiaroscuro. It’s a word that encapsulates my work, my style, my voice. There is no contrast in the light unless you have the darkness.  So I write about the shadows; I write about what’s hidden inside the dark corners where we can’t easily see. Dual-wielding film and the written word as my tools of choice, I seek to create stories that linger, stories that crawl into your brain and whisper in your ear, stories that sink their teeth in your heart.

When I was a kid, I wanted to be a robot when I grew up. I’d watch anything that involved robots, AI, androids, Transformers, cyborgs—machines that could be like humans, but were not bound by biology and the fallacies people exhibited. I liked the logic and the efficiency I saw in robots. (I empathized with a machine’s desire to understand humanity, because I didn’t get people either. I also wanted laser eyes.) As I grew up and it became increasingly obvious I wasn’t going to turn into a robot, I decided the next best thing was to tell stories–about robots and about people.

Film has unlimited visual potential to create the stories I want to tell. The written word is equally limitless. Between the two mediums, I have the tools to explore the darkness as well as the light. Chiaroscuro. I will paint in shadow, on film and with words, to tell the stories I must.  And there will definitely be robots.

Have you had to write an Artist’s Statement, or the equivalent, for something? I’m curious to hear from other people about this.